The embryonic lens is supplied with nutrient by the hyaloid artery (which grows forward from the optic stalk to reach the posterior lens surface at about day 25 of gestation) and the tunica vasculosa lentis (which is formed by day 30 of gestation). Regression of the vascular supply starts at about day 45 of gestation and is complete some two to four weeks after birth. Persistence of these vessels and proliferation of associated mesodermal elements of the tunica vasculosa lentis posterioris produce the main lesion of fibrovascular plaque formation on the posterior lens capsule. This plaque appears as a dense yellow/white opacity with multiple pigment foci attached to the posterior lens capsule. Blood vessels may be visible within the plaque and at its periphery. Other features of persistent hyperplastic primary vitreous include persistent capsulopupillary vessels (iridohyaloid vessels), coloboma of the lens, posterior lenticonus, intralenticular and retrolental haemorrhage. secondary cataract, persistence of the hyaloid artery and Bergmeister’s papilla (remnant of the glial sheath around hyaloid vessels on the optic disc), and retinal dysplasia.

Currently the Dobermann and Staffordshire bull terrier are certified for persistent hyperplastic primary vitreous under the Eye Scheme. The mode of inheritance is complex, but the genetic data available suggest an autosomal dominant gene with variable or incomplete penetrance.

Severe lesions cause marked visual loss or blindness. Milder cases of retrolental plaque formation spare the lens periphery and allow adequate vision. Although these milder lesions tend not to cause progressive cataract formation in the Staffordshire bull terrier, cataracts in affected Dobermanns often progress to produce severe visual impairment or blindness. The Staffordshire bull terrier also suffers less from the posterior lens capsule deformities, but has more widespread retinal folds and rosettes than the Dobermann. The condition is not common in either breed in the UK, but represents a serious congenital inherited problem requiring constant vigilance. Surgical treatment of those cases with visual problems is fraught with difficulty and there is a high risk of postoperative complications. 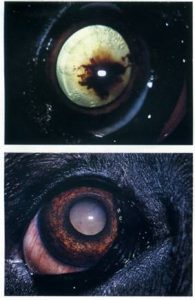